30th Anniversary of the ADA: The Fight for Disability Access Continues 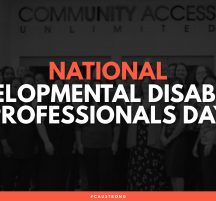 On behalf of Community Access Unlimited What is a Developmental Disability Professional? Developmental disability professionals make sure that people have access to the supports and resources they need to live full, self-directed lives. They go by different names based on their specialized areas of service - Direct Support Professionals (DSPs), Support Coordinators, Behaviorists,... 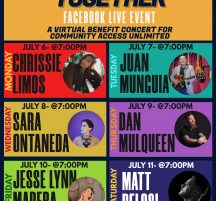 Find your Groove and Support CAU with our Virtual Concert Series!

The sounds of different genres of music are as loud as ever this summer, even as most listen to music at home instead of a concert hall. Everyone with an internet connection is invited to listen in together for a week-long virtual concert benefiting Community Access Unlimited from July 6-11. “It will be a week of nights of music that we hope everyone will get entertainment out of while we... 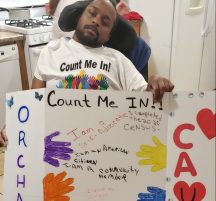 Want to Support Social Services in New Jersey? Complete the 2020 Census with CAU!

We're highlighting social services in New Jersey and how the Census impacts them! The federal government uses Census data to allocate resources to state governments- more than $45 billion dollars a year in New Jersey. People with disabilities have been identified by the Census Bureau as a hard to count population, meaning they are more vulnerable to being missed in the decennial... 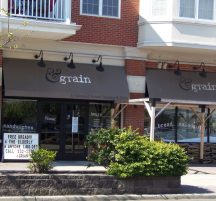 &grain, a restaurant in Garwood, has joined Rally for Restaurants thanks to CAU members With New Jersey now in its eighth week of state-mandated stay-at-home restrictions and all restaurants and bars closed to diners, eateries across the state are suffering mammoth losses in income. Restricted to selling take-out orders only, New Jersey restaurateurs are fighting to hold on until the... 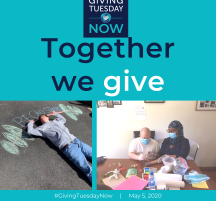 Your support is needed on #GivingTuesdayNow

Click here to donate to our campaign! Community Access Unlimited is responding to help meet the needs of its members with disabilities and youth at risk by launching a fundraiser with a goal of $25,000 to support its new operations and COVID-19 safety measures as a provider of essential services across New Jersey. #GivingTuesdayNow is a new global day of giving and unity that will take...

Did you know that many CAU services are available remotely? Our vital programs and services are still active and going strong. CAU is a provider of essential services that will continue to be delivered throughout the pandemic. Our direct support staff will continue to provide on-site supervision and support 24 hours a day, every day. CAU has remained diligent in continually securing and...

CAU Videos to Help you Relax and Unwind at Home

Have you checked out the CAU YouTube Page? Subscribe to Community Access Unlimited on YouTube to enjoy educational videos and other information and CAU activities! Below are a few videos to help you relax and unwind at home. Be sure to check out our page for educational videos for families with instructions for getting dressed (part 1 and part 2), putting on shoes, and cleaning up after a...

Rebecca Kasen, Advocacy Director Disability advocacy, the Census, and CAU's response to COVID-19 were among the topics in CAU's interview this week on 106.7 Lite FM. Advocacy Director Rebecca Kasen spoke with host Nina del Rio. "We do feel like there is a strong presence in the state government to make sure that our Direct Support Professionals are being paid competitive wages, so... 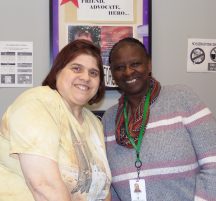 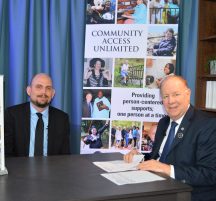 Our City: Check out a CAU interview with Elizabeth Mayor Chris Bollwage

We sat down with Elizabeth Mayor Chris Bollwage to talk all things CAU: from how we started, how our programs have expanded, and how the agency is navigating for the future. Joshua Bradley, our assistant executive director of quality assurance and training, shared that the agency's main focus continues to be getting people with developmental disabilities and youth at risk involved in the... 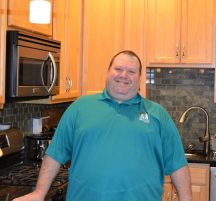 Congratulations are due to a CAU member who now has a condo of his own! Gary Rubin now has a lifetime tenancy at his home in Elizabeth, and will have voting rights in his condo association. The two-bedroom, two bath condo he has all to himself is a far cry from institutional living at E.R. Johnstone Training and Research Center, where he lived and worked as a young man from 1985 until... 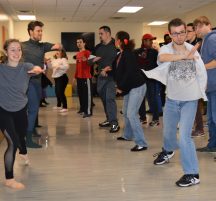 Dancers Take the Floor at ACE

Fanning out across the floor of the Academy of Continuing Education, students danced, stretched and moved last week with the direction of a talented local dance company. Many of the members were no strangers to the joy of dancing as participants in Community Access Unlimited’s annual musical production and other performing arts programs. Four dancers and choreographer Carolyn Dorfman of... 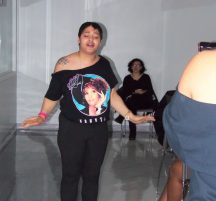 Crystal Jackson stood before a small audience of other youth at risk and sang Whitney Houston’s “I Look to You,” with its lyrics, “After all that I’ve been through / Who on Earth can I turn to / I look to you.” Jackson is living within New Jersey’s child welfare system and was participating in a local celebration of National African American Read-In along with about 20 other... 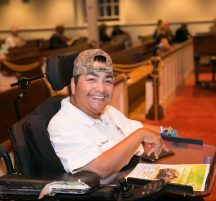 In My Words: The Social Security Proposal

Many CAU members are fierce self-advocates fighting for policies that give people with disabilities equal access to opportunities that are afforded to citizens without disabilities. This year we recognize the 30th anniversary of the Americans with Disabilities Act, which prohibited discrimination based on disability in 1990. The ADA also requires covered employers to provide reasonable... 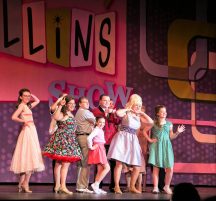 “Guys and Dolls” Invited to Audition for CAU Community Players!

CAU Community Players in "Hairspray Jr." in 2019 Place your bets! The Community Access Unlimited Community Players will take on a Broadway classic in three performances of “Guys and Dolls Jr.” this summer. The popular musical comedy follows gamblers, gangsters and other characters in a Runyonland fantasy of New York City. CAU is currently welcoming CAU members and members of the... 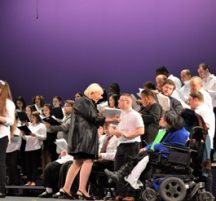 Musicians with and without disabilities strike perfect chord at collaborative concert

There was a steady bustle back stage Friday night at the Eugene G. Wilkins Theatre for the Performing Arts at Kean University a half-hour before the curtain was set to rise. Musicians tuned their instruments while singers stretched their vocal cords and performers dabbed on make-up in bathroom mirrors. Yet what was unique about this production was the performers were a mix of musicians... 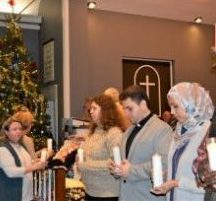 What do the world’s religions tell us about the homeless and the needy? Leaders of different faiths shared prevailing teachings on charity, generosity and poverty Thursday at Zion Evangelical Lutheran Church in Rahway. The memorial vigil honored the lives of people who have died due to homelessness in Union County. The 4th annual vigil was held just before the longest night of the... 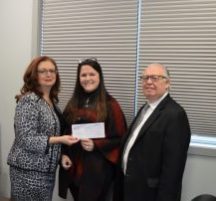 The final touches are complete on a brand new house in Union built by Community Access Unlimited. The project was supported in part by a $10,000 grant from Valley Bank. It will soon be home to four women in a supported living program for people with disabilities. CAU is a Union County-based, statewide nonprofit that strives to integrate people with disabilities and at-risk youth into... 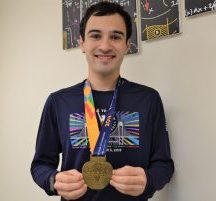 Running just comes naturally for 24-year-old Robbie Matos- and he’s picking up speed. The Springfield native breezed to a 4:03:59 finish in the world’s largest marathon in New York City on Nov. 3, completing with the top third of runners. Robbie is a CAU member who attends the Academy of Continuing Education in Cranford, where he studies theater, upper level math and... 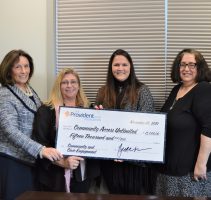 Community Access Unlimited (CAU) has been awarded a $15,000 grant by The Provident Bank Foundation through their Major Grant program in support of Community and Civic Engagement programming. The program aims to empower at-risk youth through advocacy and leadership training to reduce social and class inequalities and improve their lives. CAU is a Union County-based, statewide nonprofit... 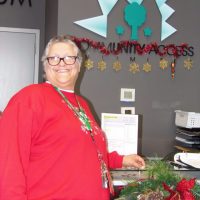 What are we Thankful for this Year?

Joyce Cargle was not sure how much she had to be thankful for five years ago after being diagnosed with cancer. Since then she has had chemotherapy, undergone an operation for a hernia and suffered a leg injury. Yet today, Cargle, a person with disabilities, is in full remission, her other ailments have passed and she is all smiles as she prepares for a hearty Thanksgiving dinner and... 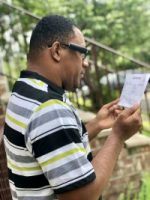 Assistive Tech is in your Hands at CAU

Assistive technology (AT) is moving the needle for communication for people with developmental disabilities. At school, students who are nonverbal or have limited speech are often loaned tablets equipped with communication augmentation apps such as Proloquo2Go. While the tech isn’t new, it is continually improved and embraced in schools and at home. Other examples of assistive tech... 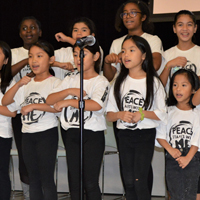 A night of solidarity and faith gathered women and men for a conference Oct. 29 at CAU headquarters in Elizabeth. Under a “United and Empowered” theme, six women with diverse experiences in faith and work sought to share universal lessons about spirituality and serving others. “We recognize that women do a lot in the background in ministry and faith,” said Michelle Mobley, an... 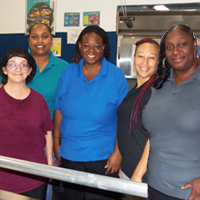 Each day Sharon Bravo and Chavia Crute travel from their homes in Elizabeth to Irvington High School to work in the cafeteria, helping to prepare and serve meals and clean the kitchen afterward. According to Krystal Tanneer, food service director for Whitsons School Nutrition, which operates the school’s food services, Bravo and Crute are two of her best and most reliable employees. As... 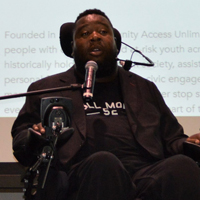 Eric LeGrand lied paralyzed on the football field at MetLife Stadium nine years ago, struggling to breathe and thinking he was going to die. Today the former Rutgers University football player considers himself truly blessed and encourages others to always find reason to be positive in the face of challenges. That message was particularly poignant when LeGrand spoke to a rapt audience of... 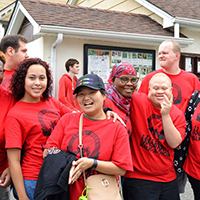 More than 600 Community Access Unlimited members, employees and friends turned out at Oak Ridge Park in Clark on Saturday to celebrate at the annual Ira Geller Walk-a-Thon. Whether walking, rolling, dancing, or just hanging out with friends, attendees came together for a great time during CAU’s 40th anniversary year. Sponsors of the Walk included Investors Bank, Lakeland Bank, and... 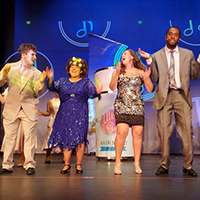 RAHWAY – Hundreds of theatergoers were moved by a very special production of "Hairspray, Jr." performed by the CAU Community Players, a troupe of actors both with and without developmental disabilities. The troupe staged three productions of the popular musical at the Rahway High School Center for Performing Arts on the last weekend in June. Click to view full...

ELIZABETH, NJ - Often overlooked in the national debate about the treatment of immigrants being housed at detention facilities along the Southern border and elsewhere in the nation is the treatment of immigrants with disabilities among those being detained. This past Friday a member and staff coordinator from Community Access Unlimited helped voice those concerns at a vigil held outside the... 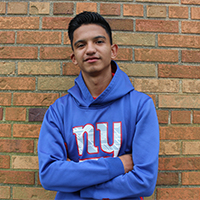 Sometimes a struggling youth simply needs the right environment and support to turn around his or her life. Alejandro Amaya has been with CAU for just about a year but has already made significant progress toward a better future. An unfortunate home life situation led Alejandro to a short stay in a youth shelter in Bergen County before being referred to CAU. Today he lives in a CAU property and... 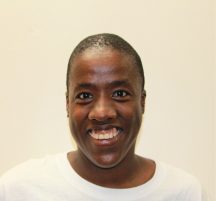 Tonya Hopson very much looks forward to going to work at Target in Clark, where she has been employed for 12 years working in the children’s department four to eight hours per week. “I like my friends here and the customers I get to meet, the little kids who recognize me when they come in,” she said. “Some of them I’ve known since before they could walk. It really becomes a community...