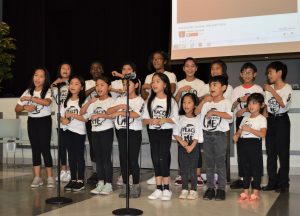 A night of solidarity and faith gathered women and men for a conference Oct. 29 at CAU headquarters in Elizabeth.

Under a “United and Empowered” theme, six women with diverse experiences in faith and work sought to share universal lessons about spirituality and serving others.

“We recognize that women do a lot in the background in ministry and faith,” said Michelle Mobley, an organizer of the Women of Faith conference with the Union County Interfaith Coordinating Council. “The faith community as a whole I think is divided, and I want everyone to have an awareness that we share the same concerns in the community.”

Several panelists spoke about such shared concerns for the Union County area and beyond- including drug abuse, alcoholism and homelessness.

Cathy Waters, Program Director of the Union County Prisoner Re-Entry Initiative at Urban League, spoke to the unique challenges women can face when returning to society, such as regaining custody of their children. She said that the organization has female faith-based mentors available to offer support.

“A lot of women need support and positive feedback, a spiritual boost,” said Simeria Dewalt, a speaker who told the crowd that she faced losing her children to the foster care system when she was incarcerated. “If you don’t have that spiritual foundation, you’re bound to any negative thing because you’re open to it.”

People of faith who visited prison offered hope, she said.

“That showed me that someone out there cared.”

Keynote speaker Dr. Odessa McNeill called upon women to find unity and stand up against what is wrong, bearing burdens like the lost Hebrew tribe of Issachar.

“We have to know what our assignment is,” McNeill said. “You women here today know what America needs, what your community needs…seize the opportunity to make a difference and do what is necessary to bring about change.” 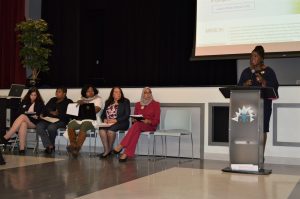 Attendee Niki Sumka, a family support specialist for Prevention Links, said she came to the event to network and spread awareness of substance abuse prevention and recovery services. In her experience, faith leaders are often supportive of people dealing with these problems.

“A lot of times one of the first people someone turns to is a member of the faith community,” she said. “Also, a place of worship can be important self-care for family members.”

Rev. Coley roused the crowd in speaking about equal opportunity for women in ministry- or the lack thereof.

“Women have historically been disenfranchised from leadership roles only because of their gender…yet it often appears that the ranks of the faithful are dominated by women,” she said.

The topic of women becoming priests is still taboo, and an active fight, with women protesting the ban at the Vatican as recently as about a week ago, Coley shared. Campaigners who gathered in Rome on Oct. 22 said lifting the ban would save the Catholic Church where it is failing to ordain enough men.

“The power that a woman has was not given by man, it was given by God,” Coley said. “We are called by our Creator for a mighty purpose and we must fulfill that purpose.”