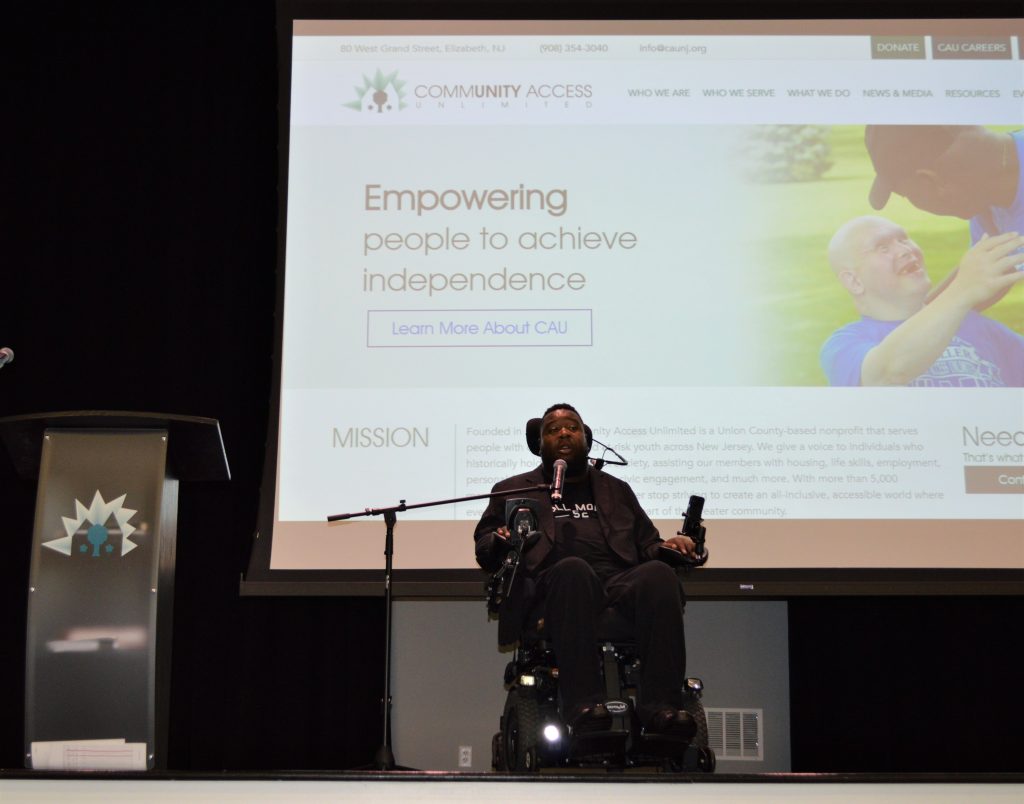 Eric LeGrand lied paralyzed on the football field at MetLife Stadium nine years ago, struggling to breathe and thinking he was going to die. Today the former Rutgers University football player considers himself truly blessed and encourages others to always find reason to be positive in the face of challenges.

That message was particularly poignant when LeGrand spoke to a rapt audience of youth services professionals at the 7th Annual Youth Services Networking Conference, held this week at Community Access Unlimited in Elizabeth.

The conference participants came from an array of nonprofit and government agencies that support at-risk youth, often seeing the most trying circumstances while working with young people who frequently have little about which to feel positive.

LeGrand was paralyzed Oct. 16, 2010, when he fractured his C3 and C4 vertebrae making a tackle against Army. He and his family were told he would never again be able to breathe without a ventilator, eat solid food or walk. Within days he was breathing on his own and by Thanksgiving eating a full holiday dinner. He plans to one day walk again, returning to MetLife Stadium, lying down on the field and then rising to walk off on his own.

In the meantime, LeGrand has dedicated his life to motivating others to always stay positive and raising money for the Christopher and Dana Reeves Foundation, a goal that has passed $1 million.

LeGrand told the audience that despite his sense of commitment and perseverance honed by years of playing football, it was difficult for him to allow others to help care for him.

“It wasn’t easy for me to trust other people,” he said. “When you talk to someone who needs your help, talk to them so they trust you. You never know where a conversation might lead in this world.

“In life, we have to appreciate the things we do have,” he continued. “We all are going to have some adversity. How you handle it is going to be what defines you.”

LeGrand told the youth services professionals that success is “the peace of mind you get when you did everything you could to be the best you could be.”

Also speaking at the conference was James Bedoya, who was raised by a single mother in Jamaica, Queens, lived in the projects, faced prejudice for his Latino heritage and found his way into crime and drugs. When he was arrested as a sophomore in high school, it was a pivotal moment that helped him set a new direction for his life, he told the audience.

Bedoya graduated high school and went on to Seton Hall University, where he currently has a 3.6 grade point average, enjoys the financial support of five scholarships and is active in social causes.

“I’m proud to say I’m happy with what I have achieved so far but I’m not satisfied yet,” he said.

“The conference is an opportunity for youth services professionals from throughout the county to come together, hear the stories of others, receive valuable updates and learn,” said Marshall Christie, assistant executive director of youth services at CAU. “Equally important, it is an opportunity for them to network, to place a face with a name or meet new people in their sector who might be able to help them be more effective in supporting youth.”

Frantzsi Celestin is a juvenile probation officer with the state Administrative Office of the Courts who attends the conference each year.

“I learn about the different resource organizations in the county we might not be aware of,” he said. “I also look into any availability for my kids who can’t be at home to take advantage of the access Community Access affords.”

Raquel Jones is a clinical specialist with Volunteers of America who also attends the conference annually.

“It’s a great opportunity for the providers of Union County to get together and learn about the resources to benefit the youth we service,” she said.