In Remembrance of 9/11 and Colleen Fraser 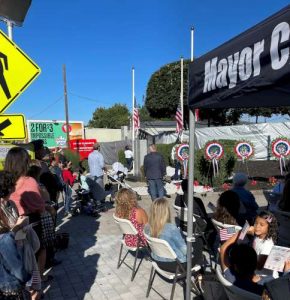 Elizabeth residents gathered to remember and honor the lives lost on 9/11 this Saturday, with community dignitaries and residents attending a ceremony at the Midtown Pedestrian Plaza, where the city has a 9/11 memorial statue.

The ceremony opened with sirens at 8:46 a.m., in recognition of the first attack, and a moment of silence.

Among the six Elizabeth residents who died that day was Colleen Fraser, who served on the board of Community Access Unlimited.
Colleen is missed every day by those who knew and loved her. Colleen was well-known statewide as an advocate for people with disabilities. She was Executive Director of the Progressive Center for Independent Living and served
on the New Jersey Developmental Disabilities Council for more than 11 years. Colleen helped draft the Americans with Disabilities Act and advocated strongly for community living options for people with developmental disabilities.
In addition to her work at CAU, over her career she served as director of the Union County Office on the Disabled and as the director of D.I.A.L., another independent living center. She was a true hero, a champion for people with disabilities, and a good friend.
Watch video tribute:
https://fb.watch/7-62C80ZcW/ 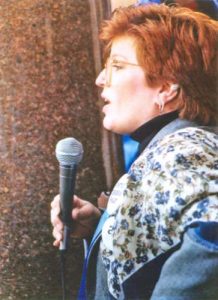 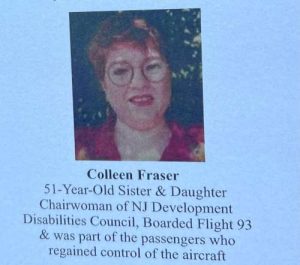 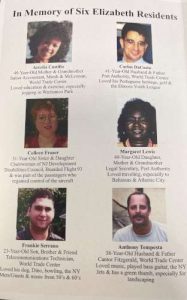