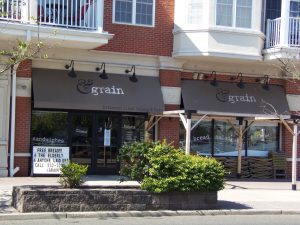 &grain, a restaurant in Garwood, has joined Rally for Restaurants thanks to CAU members

With New Jersey now in its eighth week of state-mandated stay-at-home restrictions and all restaurants and bars closed to diners, eateries across the state are suffering mammoth losses in income. Restricted to selling take-out orders only, New Jersey restaurateurs are fighting to hold on until the lockdown is lifted. Celebrity chef Tom Colicchio predicted up to 75 percent of the nation’s restaurants might never again reopen their doors.

Locally, six CAU members are giving their time to help local restaurants stay afloat as part of a national movement called Rally for Restaurants™, an effort to promote local eateries and encourage the public to order take-out food and buy gift cards while spreading the word about their favorite restaurants through social media.

Several weeks ago the Gateway Regional Chamber of Commerce, which is coordinating the local Rally for Restaurants effort, issued a chamber-wide request for volunteers to make calls to area restaurants encouraging them to enroll in the Rally for Restaurants program. Sandra Lynch, CAU’s assistant executive director of employment services, thought employed agency members who were not able to work due to the state shutdown were the perfect candidates. CAU also opted to pay them to make the calls.

“They love it,” Lynch said. “It takes their mind off the complacency and boredom of being home all the time. Their immune systems are compromised so they never leave their home. This gives them a chance to talk to people while also working on their phone skills and efficacy. They continue to work with their job coach and it gives them the chance to help the community.”

After brief training, the six CAU members jumped right in making calls to area restaurants, according to Lynch. The intent is to educate the eateries about the Rally for Restaurants movement and encourage them to enroll in the program and then send out emails and social media messages to their contact lists asking for their support.

CAU member Gabby Arogano is enjoying making the calls. She said she was nervous at first but when the first three restaurants she called signed up, she started to feel really good.

“I felt really proud of myself that I was able to help them,” she said. “If I ever needed help, I would want someone to help me. When I first started it was a bit of a test. I had to look at it as, ‘Now you’re a telemarketer.’”

While all volunteers are given a script by the Gateway Chamber, Arogano prefers to use her own words.

“I tell them, ‘Due to the pandemic we know you’re struggling and we can put you in this directory that makes it easier for people to find you and keep your business open,’” she said. “It’s a no-brainer.”

“I try to work at it,” she said. “I also like helping the restaurants. People want to go out for dinner and have their family time. So by helping these restaurants to stay open I’m also helping the community.”

Collectively the CAU members have made more than 150 calls to restaurants encouraging them to enroll in the program, according to Lynch.

Eric Nowoslawski, director of special projects at the Gateway who is coordinating the chamber’s Rally for Restaurants effort, is thrilled by the response of the CAU members.

“They’ve gone above and beyond,” he said. “The Community Access Unlimited members alone accounted for nearly a third of our 500 calls made. They’ve been enthusiastic and shown real initiative. We can’t thank them enough.”