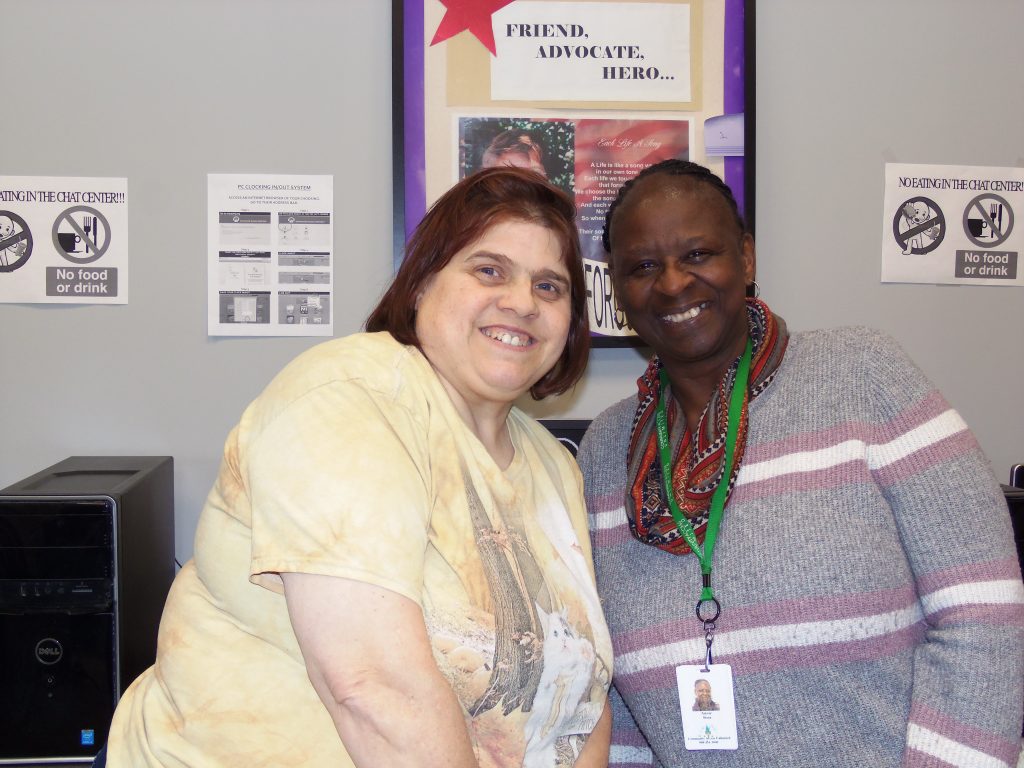 People with developmental disabilities are ready. As the calendar turns to March, Developmental Disabilities Awareness Month, members of the New American Movement for People with Disabilities (NAM) have an agenda of issues they are taking action on, including pending legislation in Trenton, voter registration, the Census and their general rights.

NAM members are busy this month. Member Annie Sims recently traveled to Trenton to testify at a hearing on a proposed Senate bill to raise the wage rate of direct service professionals (DSPs) who support people with disabilities. While she was unable to make an appearance at the hearing, she spoke directly to Senate President Stephen Sweeney about her belief that the bill needs to be expanded to cover all state-funded workers supporting people with disabilities.

“I have direct care staff work with me only a few hours a week,” Sims said. “But I use a lot of supports from other staff at CAU every day. The Facilities Department takes care of my apartment. My employment support counselor and my supervisors make sure I have what I need to do my two jobs. None of these people are considered DSP but if any of them left to make more money I would not have everything I need.”

Voting is another hot button for NAM members. Sims did not vote until she came to CAU at the age of 32.

Sims met with Senate President Stephen Sweeney in Trenton to discuss a pending bill dealing with compensation for workers who support people with disabilities.

“My mother told me, ‘This world does not have a vote for people with disabilities,’” she said “When I came to CAU my counselor told me I have the right to vote. But I didn’t know what to do so I learned. And the first time I voted it felt good.”

CAU each year holds a voter registration night in March for its members to both teach them how to vote and allow them to register. The agency also distributes a voter guide to its members and the general population of people with disabilities.

This block of voters has a message for state and federal office holders, according to Rebecca Kasen, advocacy director at CAU.

“People with disabilities need to vote and their voices need to be heard,” she said. “We can easily get people to show up at rallies. We are a force to be reckoned with.”

Equally important to NAM members is participation by people with disabilities in the 2020 U.S. Census.

“The Census is very important,” said NAM member Mark Bloom in comments he prepared for the National Disabilities Right Network. “We need to make sure everyone in New Jersey is counted. We are concerned that people who live in supervised settings won’t be counted. Social service funding is dependent on the Census. We also want to make sure we have representation in Congress.”

NAM members also will be traveling to Washington, D.C. later this month to attend the ARC of the United States’ Disability Policy Seminar, an annual event that fosters relationships between Capitol Hill office holders and their staffs to advance the grassroots movement of people with developmental and intellectual disabilities.

Yet while Development Disabilities Awareness Month provides NAM members with another platform to advocate about these and other issues – from airplane bathroom accessibility for people with disabilities to police training on dealing with this segment of the population – they are year-long passions, according to member Juanna Quinn.

Join us for Voter Registration Night on March 10 at 5:30 p.m. at the CAU Main Office at 80 West Grand Street in Elizabeth. There will be prizes and a presentation from NAM! RSVP Rebecca Kasen at rkasen@caunj.org.