Teachers and Students Strive for Success During Autism Acceptance Month

Michael Adamowsky says he didn’t plan it, but he has found his purpose in life through teaching. 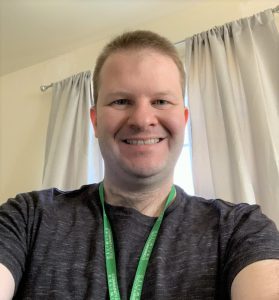 Michael Adamowsky is an educational specialist at CAU.

After completing his master’s degree in accounting and starting a career at Community Access Unlimited, Adamowsky found that the accounting position didn’t suit him, and he didn’t like sitting at a computer all day. He decided to become more directly involved in the mission of CAU, to integrate people with disabilities and youth at risk into the community through comprehensive supports.

Now, Adamowsky is an educational specialist at the CAU Day Program, where he leads groups in a variety of subjects and gets members involved in different activities. He also assists at the Academy of Continuing Education, CAU’s answer to post-graduation learning for adults with developmental disabilities.

As a person on the autism spectrum, Adamowsky said he is able to relate to his students with disabilities in a unique way.

This April, The Autism Society of America is making a shift to celebrating Autism Acceptance Month, previously known as Autism Awareness Month. The campaign is designed to celebrate differences and increase awareness of the signs, symptoms, and realities of autism.

Adamowsky said he wants to give members all the support they could need or want to succeed in their Day Program groups. He also wants people to know that having a diagnosis does not mean a person can’t excel in their studies and be successful.

“I received ‘normal’ schooling through life; because of my autism I just had a little help along the way,” Adamowsky said. He was named hardest working student in his class, was inducted into multiple honor societies, and went on to achieve his master’s degree.

Adamowsky brings the same passionate energy to his online learning groups as he did in person at Day Program.

“That’s basically the cornerstone of this whole thing,” he said. “I feel like the teacher has to be just as involved and enthusiastic as the members are, because if the teacher isn’t able to teach, how will the students be able to learn?”

“He’s a great example to our members and members who are striving to work,” said Onekia Grier, managing assistant executive director of Day Habilitation and Educational Services. “He does such a great job with teaching, there is a waiting list for members to get in his groups.”

Adamowsky said he is carefully planning syllabi for groups like math and science, poetry writing, and financial literacy for the return of in-person Day Program services when the program reopens under state COVID-19 guidelines.

“I see what’s on the inside and what they’re capable of doing,” Adamowsky continued. “A lot of the members have told me that’s why they love me, because I’m able to see past their disability and they haven’t had interactions with other people that are the same.” 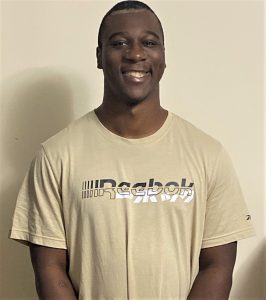 Kyzier Davis is a student and new member at CAU.

CAU members with autism can benefit from a variety of supports, from Day Program to behavioral support to employment training, depending on their needs and goals.

Kyzier Davis is a new CAU member who is excited to graduate from high school in June.

“I have support from my staff, social workers and teachers,” Davis said.

Davis said he is not sure what he wants to do after he graduates, but he is focused on coping and life skills with the help of CAU behaviorists and his residential program staff. Exercise has been one of the most beneficial ways to help regulate his emotions.

“Even if I have good days and bad days, I do pushups every day,” Davis said. “I feel relief and calm from exercise.”

Davis, 21, said he is concentrating on managing his behavior in public by expressing himself at home. That includes drawing and writing down his feelings in a journal. One goal he has is to one day see himself on TV.

“I’ve had a lot of good days so far…I had a great March,” Davis said of his time with CAU.

Adamowsky said he hopes that people with autism never limit themselves in life.

“I really hope that autistic people are not afraid to be themselves,” he said. “There is a purpose in life for everyone; no matter what kind of person you are there’s a pot of gold waiting for you at the end of the rainbow if you’re just willing to find it.”