Advocates Recognize Disability Pride Month and the Anniversary of the ADA 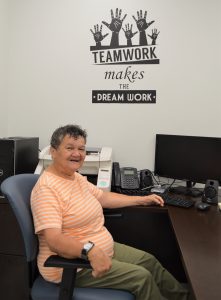 Myrta Rosa at work at Community Access Unlimited in Elizabeth

July 26 marked the 31st anniversary of The Americans with Disabilities Act of 1990- a landmark piece of legislation that prohibits discrimination against people with disabilities in several areas, including employment, transportation, public accommodations and access to government programs. July is also celebrated as Disability Pride Month.

Advocates at Community Access Unlimited are reflecting on how far they have come and the work still to be done for a more accessible world. CAU is a Union County-based, statewide nonprofit that strives to integrate people with disabilities and youth at risk into the community through comprehensive supports.

“This gives us the opportunity to show “normal” people that people with disabilities can do things, and just because they have a disability doesn’t mean they don’t stop achieving in their lives,” Rosa said of Disability Pride Month.

Helping Hands and the New American Movement for People with Disabilities, formed at CAU in 2012, have continued to meet virtually through the pandemic to discuss safety during the pandemic and key advocacy issues. Members also give presentations at local schools to educate on transitioning to services through the Division of Developmental Disabilities.

Rosa and member Annie Sims have testified to NJ Transit to report issues with accessibility and reliability in the Paratransit system. Rosa, who uses a walker, said she would also like to see more curb cuts by traffic lights for those with mobility and visual impairments. 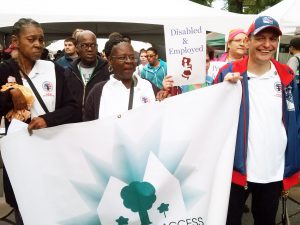 Annie Sims, center, at an event with members of NAMPD

Sims said that one of the most important things she does is encourage individuals with disabilities to advocate for themselves.

“I didn’t know what self-advocacy was until I came in every Tuesday and saw people standing up for themselves 10 years ago,” Sims said.

Sims and Rosa agree that “disability” is not a word they like to use in their lives- and that everyone should be respected for their differences.

“You still have a strong mind a strong heart…you’re not [disabled]- you’re still normal,” Sims said.

Rosa added that as our aging population grows, more people will need accommodations because of new disabilities, and we need to be ready to make life accessible for people.