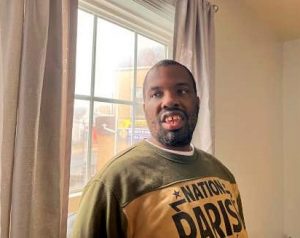 Autism acceptance is a major step beyond awareness – that’s why April is now known as Autism Acceptance Month.

The Autism Society of America proposed the change last year from Autism Awareness Month to Autism Acceptance Month with the intention that the new terminology would help promote change for individuals with autism.

Members, staff and family of people with autism at Community Access Unlimited are all part of ensuring that everyone who is on the spectrum has opportunities and inclusion in their lives- at work, school, home and out in the community. The agency serves 436 members with an autism diagnosis around New Jersey.

CAU member Patrick Hanlon has interned in marketing for CAU and is excited to start his next job working at a local store. He said that the CAU employment department helped him find a job where he is able to work early hours to limit his interactions with crowds of people.

“I’m pretty exuberant about it,” Hanlon said. As a person with autism, he said that when it comes to hiring employees with autism or others who are neurodivergent, “Just be patient and be more understanding. Try to make as many accommodations as possible without sacrificing a good work ethic.” He added that he is personally proud of his creative skills including writing and cinematography and wants to become a film director.

The federal Office of Disability Employment Policy is partnering to conduct more research and recognizes that adults with autism “offer myriad strengths to potential employers, yet face unique challenges in entering the labor force.” There are estimated to be more than one million young adults on the autism spectrum in the U.S. ages 16 through 28. The unemployment rate for people with a disability is about twice as high as the rate for those without a disability.

Beyond employment services, CAU offers a wide range of supports depending on the needs of members with developmental disabilities, including autism. Members may live in residential programs with 24-hour trained staff, access assistive technology or speech therapy to help them communicate, attend the day program or Academy for Continuing Education, or work with a behaviorist to assist them in increasing positive behaviors and integrating into the community. These services and more are listed at caunj.org.

For George Kearney, behavioral services are making a difference for his son Rashad, helping him learn things like putting on a seatbelt and making his favorite lunch, a peanut butter and jelly sandwich.

“I see a big change in him where overall he’s getting better,” Kearney said. “I would like for Rashad to maintain his independence and not depend on others and work more on his communication skills for him to be able to communicate with other people. Some of the goals are going pretty well and others he still needs help with.”

Kearny also emphasized patience and engagement in getting to know individuals with autism, especially if they have limited speech like his son.

“You have to be very patient and very understanding because each person has different triggers and different ways of doing things. That’s something that you have to catch on to quick, to know that person’s likes and dislikes in order to make progress with them.”

Tracy LeBaron manages behavioral services at CAU and said an important part of her job is trying to give everyone the tools and ability to communicate, even if they are utilizing simple color cards to indicate “yes” and “no.” She said that some social stigma remains around autism, especially when people behave in a way others are unfamiliar with. For example, people with autism often engage in self-stimulatory behavior, such as rocking, repetitive movement or vocal sounds.

“There’s a lot of trying to destigmatize mental health right now and I think it’s the same thing with autism,” LeBaron said. “They’re still people at the end of the day- there’s a huge push on social media of people with autism, self-advocates, saying, ‘We’re still human beings.'”

The autism rate among 8-year-old children is one in 35 in New Jersey, compared to one in 44 in the United States, according to a Centers for Disease Control and Prevention (CDC) report. New Jersey’s higher rates likely reflect more complete reporting as the state is known for quality clinical and educational services for autism.

George Kearney said he is happy to find residential and behavioral services with CAU for his son that are close to home. Rashad has developed a strong bond with his behaviorist, Dennis Iheanacho, who works with him every day.

“I think the behavioral department is very caring; they are actually advocates for the members, that’s for sure,” Iheanacho said.